"Our commitment remains strong to our distinctive mission and identity as the Catholic college at the University of Saskatchewan. Closely connected is a firm conviction that our Catholic mission requires us, as an institution on Treaty 6 Territory and the Traditional Homeland of the Métis, to continue working towards reconciliation with Indigenous peoples."

Taking Reconciliation into our Hearts

"We are a healthy community today because we have deliberately focused on our mission as a Catholic college while going through the transition from our founding order. If the ultimate mission of a Catholic college is to bring people to “the full measure of their humanity”, as Ex Corde Ecclesiae puts it, it will never be accomplished once and for all. What then should we seek to be that we are not already? One answer to this question seems inescapable, at this time and in this place: we should seek to be “a reconciled community”, in which Indigenous students, scholars, and staff will find their place and flourish. We’ve made a start on this work with the help of Indigenous colleagues, Elders, and friends. Work towards reconciliation will engage the traditions we have learned from the Basilians: humble and innovative collaboration; a recognition of truth, even truths that are unfamiliar and sometimes difficult; a commitment to coming to know each other as persons." Dr. Carl Still, PhD

STM’s endowed Basilian Chair for Indigenous Spirituality and Reconciliation was formally inaugurated on May 17, 2016, with a ceremony held at the Gordon Oakes Red Bear Student Centre.

Seed money for the Chair came from a donation from the Basilian Fathers, founders of St. Thomas More College(STM). Fully funding the chair is an ongoing project of the College, but will be accomplished in the future with the generosity of our supporters.

The Chair's purpose is to encourage and foster awareness and appreciation of Indigenous spirituality and reconciliation by facilitating dialogue within the academic community and the broader society, and through exemplary teaching and reputable research. The Chair is to be a source of intellectual leadership both inside and outside the academy.

The Chair sponsors various activities such as hosting ceremonies; awarding a teaching fellowship to an Indigenous graduate student; enabling the regular presence of an Elder at STM; inviting guest lecturers; organizing conferences; supporting curriculum development; or, enabling a part-time Indigenous faculty appointment. All activities are to be focused on Indigenous spirituality and reconciliation through the study of one or more of history, culture, traditions, language and understandings of formal or informal religious and/or spiritual practices.

For many Cree people, oskâpêwis refers to an Elder’s helper or servant, one who brokers relationships; the Chair is to be oskâpêwis between Indigenous traditions and the academic community.

Harry Lafond was appointed to the newly created role of STM Scholar on Indigenous Education in fall of 2019. Mr. Lafond has previously served as the Executive Director of the Office of the Treaty Commissioner in Saskatchewan (2007-19); before that, he was the Director of Education for Muskeg Lake Cree Nation for five years (2002-2007), and that Nation’s Chief for ten years before that (from 1990 to 2000). He will teach a course as part of his academic duties at the college and will also provide guidance in academic and administrative matters as STM continues with its Indigenous engagement initiatives.

A welcoming ceremony and feast in honour of Mr. Lafond, was held on Nov. 5, 2019. It was led by Elders AJ and Patricia Felix from the Sturgeon Lake First Nation and attended by members of Mr. Lafond’s family, representatives from the STM Board of Governors, and participants in the Indigenous Voices program at STM. The ceremony highlighted Mr. Lafond’s role which will see him pursue his love of teaching as well as serve as a cultural advisor for the College.

To mark the Indigenous Achievement Week on campus, the STM Scholar in Indigenous Education hosted an afternoon of storytelling entitled, Gotta story! Âchimo (tell a story)! on Feb. 3, 2020. Future events will be planned in conjunction with Mr. Lafond's work.

St. Thomas More College first began the work of reconciliation and Indigenous engagement after a number of faculty and staff members attended Truth and Reconciliation Commission events in Saskatchewan in 2012.

The College quickly embraced its responsibility to become part of the healing process and to educate its own community through retreats, hosting conferences, welcoming traditional ceremonies into the College and by incorporating Indigenous Engagement into its Strategic Plan. The STM College Plan 2025 presents Authentic Indigenization as one of its five priorities, with strategies to: Build Capacity for Authentic Indigenization at STM; Collaborate and Consult; and to Honour Indigenous Culture.

STM continues to develop positive and enriching relationships with Indigenous Elders, leaders, communities, and groups in Saskatchewan. For example, STM has established an Indigenous Advisory Circle that includes Elders and community leaders. In part, the Circle advises the College on the shape of the endowed Basilian Chair in Indigenous Spirituality and Reconciliation that was launched in May 2016. This Chair is unique in the history of Western Canada.

STM has invited Treaty Elders to speak at conferences and panels, working closely with the Office of the Treaty Commissioner (OTC) in this regard. Members of STM’s faculty, staff, and leadership have participated for two consecutive years in the Indigenous Voices program to expand their understanding of Indigenous Ways of Knowing. STM faculty has established the Academic Working Group on Indigenous Engagement composed of faculty members who are committed to Indigenization.

STM has been intentional in reaching out to Elders from various parts of Saskatchewan and has hosted two major conferences to provide a forum for Indigenous Elders and scholars to voice their perspectives: The Respect, Reconciliation and Renewal Conference, and the Restorative Justice: Building a Culture of Hope Conference.

It is now common practice at the College to integrate Indigenous perspectives into our conference planning. Indigenous Elders and scholars are involved in annual events and ceremonies and conferences, and STM is committed to walking the path of healing and reconciliation.

August 28, 2012
Candace Wasacase-Lafferty (Kahkewistahaw First Nation), Director of First Nations and Metis Engagement at USask, presents a session on Connecting with Aboriginal Students at the Faculty/Staff Retreat at Wanuskewin

August 29, 2013
Aboriginal Engagement: Heart, Mind and Soul is the focus of the Faculty/Staff Retreat at Wanuskewin

August 28, 2014
Lyndon Linklater, from the Office of the Treaty Commissioner, presents a session entitled, We are all a Treaty People, at the Faculty/Staff Retreat at Wanuskewin 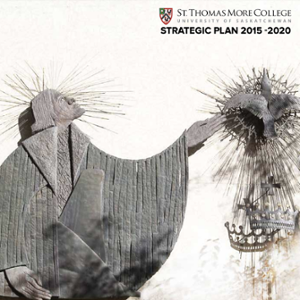 August 28, 2015
STM faculty/staff participate in a Sweatlodge Ceremony hosted by Elders AJ and Patricia Felix at their lodge in Sturgeon Lake

January 15, 2016
First meeting of the Aboriginal Advisory Circle to discuss the proposed Chair in Indigenous Spirituality and Reconciliation

May 17, 2016
Inauguration ceremony for the newly created Basilian Chair in Indigenous Spirituality and Reconciliation held at the Gordon Oakes Red Bear Centre

Oct. 29, 2016
Discussion at Corporation about the links between STM’s Catholic identity and mission and our commitment to Indigenous Engagement 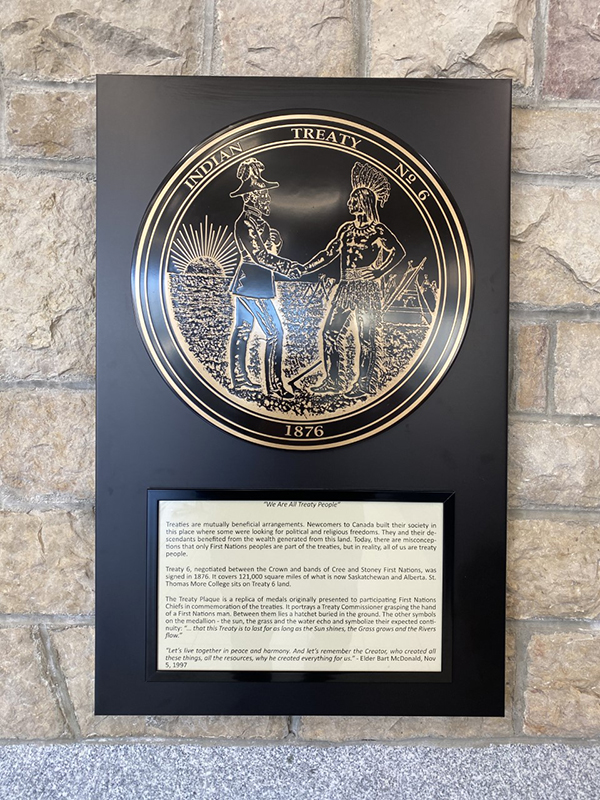 January 17, 2017
Public forum on “What should a Catholic college know to be truly welcoming to Indigenous peoples” sponsored by the Academic Working Group on Indigenous Engagement

May 9, 2017
Presentation by Dr. Darrell McLaughlin and Acting Treaty Commissioner, Harry Lafond, on their experience of team teaching the capstone course for the minor in Social Justice and the Common Good

April 2, 2019
Gertrude Rompré inducted into the Buffalo Circle at the University of Saskatchewan

August 1, 2019
Harry Lafond is named as the STM Scholar on Indigenous Education

August 16, 2019
10 members of the STM Community volunteer at the Walking with Our Sisters Closing Ceremony at Batoche

September 19, 2019
STM hosts Dialogue on Reconciliation as a follow-up to the April 4-5 workshop

September 29, 2019
For the first time, a smudging ceremony was included as part of the STM presidential installation. The ceremony was conducted by Elders A. J. and Patricia Felix 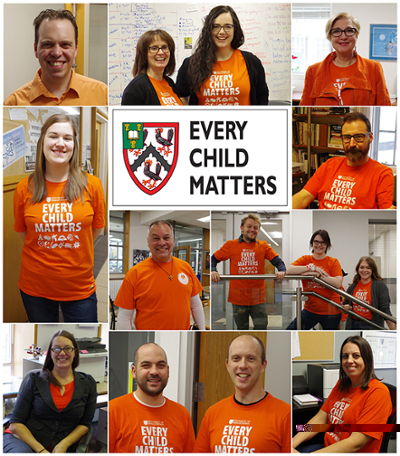 Nov. 5, 2019
Welcoming Ceremony and Feast for Harry Lafond in his role as STM Scholar in Indigenous Education 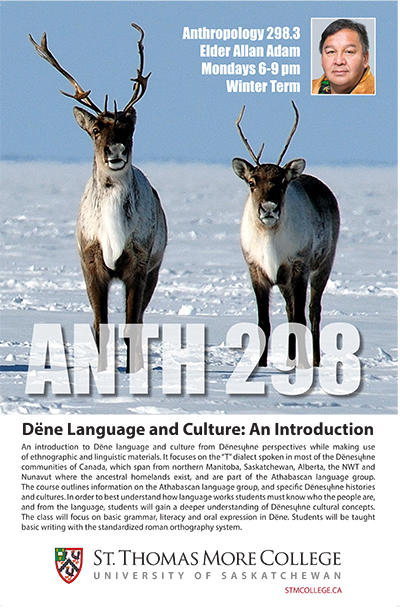 January 13, 2020
STM faculty and staff attend the Measuring Reconciliation workshop facilitated by staff from the Office of the Treaty Commissioner

August 2020
STM College Plan 2025 is launched. One of the five priorities is: Authentic Indigenization

An introduction to Dëne language and culture from Dënesųłıne perspectives while making use of ethnographic and linguistic materials. It focuses on the “T” dialect spoken in most of the Dënesųłıne communities of Canada, which span from northern Manitoba, Saskatchewan, Alberta, the NWT and Nunavut where the ancestral homelands exist, and are part of the Athabascan language group. The course outlines information on the Athabascan language group, and specific Dënesųłıne histories and cultures. In order to best understand how language works students must know who the people are, and from the language, students will gain a deeper understanding of Dënesųłıne cultural concepts. The class will focus on basic grammar, literacy and oral expression in Dëne. Students will be taught basic writing with the standardized roman orthography system.

STM has hosted a number of important lectures by Indigenous Elders, leaders, and scholars and looks forward to presenting many more as we walk the road of reconciliation and Indigenization.

Our past events include:

2012 - Candace Wasacase-Lafferty (Kahkewistahaw First Nation), Director of First Nations and Métis Engagement at the U of S, presented a session on Connecting with Aboriginal Students at the Faculty/Staff Retreat at Wanuskewin

2014 - Lyndon Linklater, from the Office of the Treaty Commissioner, presents a session entitled, We are all a Treaty People, at the Faculty/Staff Retreat at Wanuskewin