If you would like to view the holdings of the STM Library only, do the following:

1. Click on the library catalogue
2. Click on Advance Search under the catalogue tab
3. Limit your location to "St. Thomas More Library"
4. Conduct your search as you normally would if using the Word search
5. Click on "Go"
6. The resulting items should be those held at St. Thomas More College.

This is a bibliographic database covering all aspects of the Catholic faith and lifestyle from 1981 to the present. It indexes articles and reviews published in Roman Catholic periodicals, Papal documents, church promulgations, and books about the Catholic faith that are authored by Catholics and/or produced by Catholic publishers. The STM Shannon Library has acquired the online edition of this database.  For coverage from 1930-1981, please consult the paper indexes in the Shannon Library at St. Thomas More College Library.
Search the Catholic Periodical and Literature Index which is within ATLA Religion Database with ATLASerials.

Moreana: Materials by and about St. Thomas More, including the Utopia manuscript, 1518, 2nd. ed.

Social Justice and the Common Good

Moreana: Materials by and about St. Thomas More 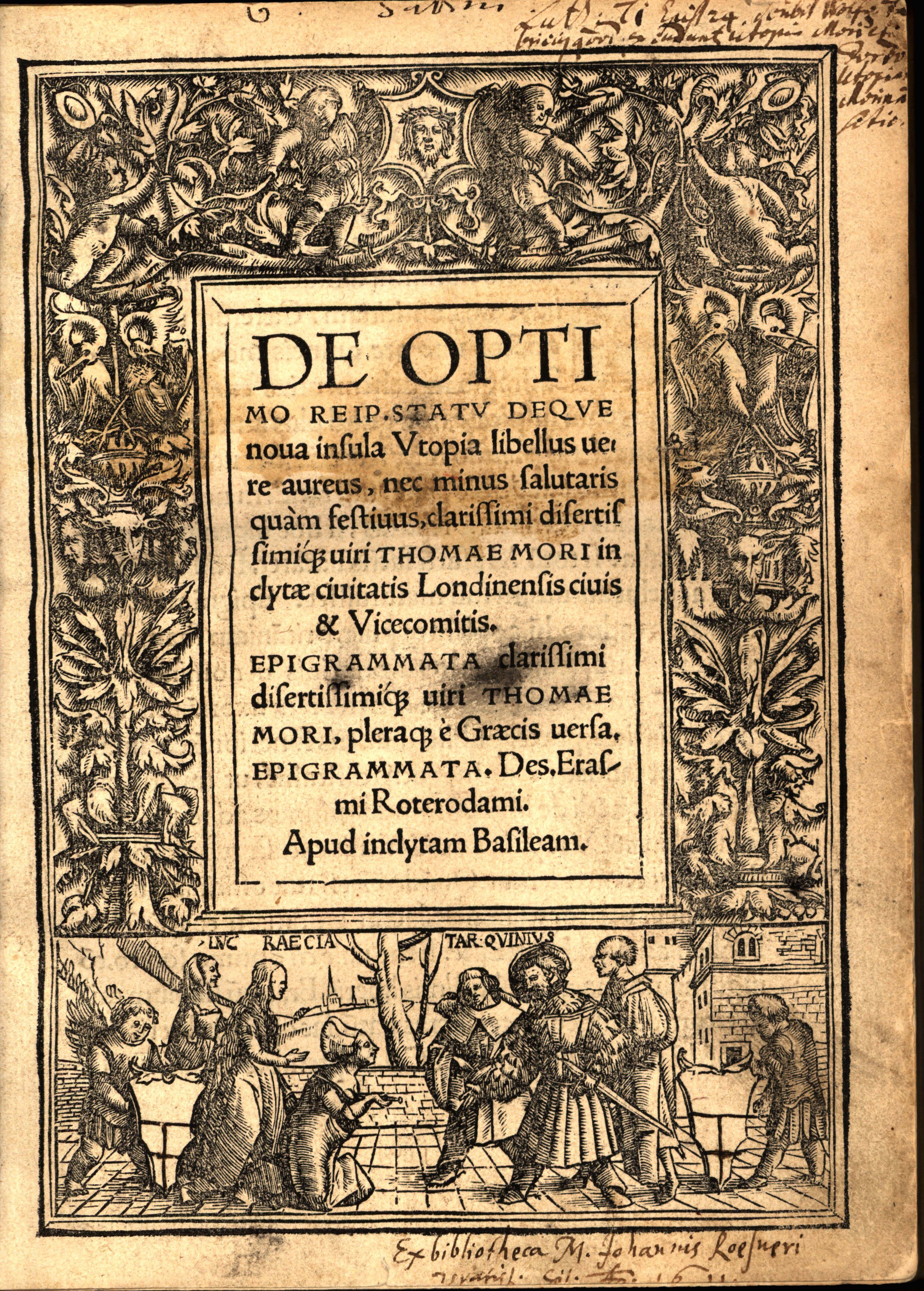 *This is a compressed document. If you are interested in the high-quality version please contact the Libray Office.

The Anglin Collection is a collection of Catholic church history, primarily of Western Canada. Records for it can be found in the catalogue.

The Shannon Library Special Collections contains music made by St. Thomas More students, 'friends', and associates of the College.

The Journal of Indo-Judaic Studies is an annual journal dedicated to analyzing the affinities and interactions between Indic and Judaic civilizations from ancient through contemporary times. This journal was published by the Religious Studies Department at the University of Saskatchewan.

The main holdings of the St. Thomas More College Archives are the administrative and operational records of the College, records of the Newman Center and photographs of faculty and student activities. In addition, records from some other individuals and organizations have been donated to the STM archives.

St. Thomas More College, commonly called "STM," was established as a federated college of the University of Saskatchewan in 1936. The pre-history of the college goes back to 1913, with the public announcement by a group of Saskatoon Catholics that they hoped to establish a Catholic college at the University of Saskatchewan. In 1926, the Newman Society was formed and permission was granted for Fr. Basil Markle to come from Toronto to begin the Scholastic Philosophy Foundation at the university. In 1927 a house was constructed adjacent to the campus to provide a residence for Fr. Markle and a chapel and Newman clubrooms for the Catholic students at the university. In 1936, the bishops of Saskatchewan agreed to the establishment of a Catholic college "sometime in the future," but stated that, in view of the Depression economy, "it was absolutely impossible at this time." Still, the Saskatoon laymen went ahead and called in Fr. Henry Carr of the Basilian Fathers of Toronto to meet with University President Walter Murray and see whether something could be done. As a result of the meetings of Carr and Murray and further negotiations with the bishops of Saskatchewan, St. Thomas More College was established by the Basilians and began operating as an Arts college affiliated with the University, with 39 students enrolled that first year (1936-37). The federated status of the college was formally acknowledged by the university in 1953. In 1943 an addition was added to the original white house to accommodate the larger numbers of students. A stone building was constructed and opened in 1956/57, with additional wings added in 1963 and 1969

This fonds includes material related to the pre-history of the college, and in particular the activities of the Newman Society, which was formed by a group of Catholic laymen, with its major work to be the establishment of a Catholic college at the University of Saskatchewan. Other records are: minutes, reports and correspondence of the Principals/Presidents, the Corporation, the Faculty/Administration Forum, and the student organizations: Newman Club/Centre and St. Thomas More Students Association. Some of the records, including photocopies of relevant documents from other archives, were acquired by then college archivist Fr. Alphonse de Valk during the late 1960s and early 1970s. In cases where de Valk is clearly the compiler, it has been so noted in the file list. Photographs consist of views of the white house (original and expanded), the construction of the stone building in its three phases (1953-1969), interiors, student activities and special events in the college over the years. In most cases the creators of the photographs are unknown

Arrangement note: The original order of each series has been retained where possible.