Lieutenant-General (ret'd) The Honoroable Roméo A. Dallaire is the guest speaker for this event.

General Roméo Dallaire is a celebrated advocate for global human rights, as well as a highly-respected author, public speaker, international advisor, and former Canadian Senator. Throughout his distinguished military career, General Dallaire served most notably as Force Commander of the United Nations Assistance Mission for Rwanda during the 1994 genocide.

General Dallaire provided the United Nations with information about the planned massacre, which ultimately took more than 800,000 lives in less than 100 days; yet, permission to intervene was denied and the UN ordered the withdrawal of its peacekeeping forces.

General Dallaire, along with a small contingent of Canadian, Ghanaian, and Tunisian soldiers and military observers, disobeyed that order.  They believed they had a moral obligation to stay, to help where they could, and to -- at the very least -- bear witness to what the rest of the world chose to turn its back. 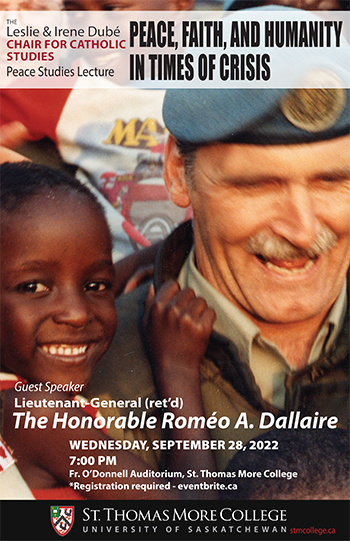